Before the quest to Erebor, Fili and Kili probably lived in the Blue Mountains where their uncle resided after the disappearance of Thráin II.  As Thorin’s sister-sons, they accompanied their uncle when he set out to challenge the dragon Smaug.

When Bilbo first met Kíli and Fíli (in the third group of Dwarves to arrive at Bag End) they wore blue hoods. After supper, when the Dwarves made music, Kíli and Fíli played small fiddles that they had brought in bags.

Early on the night when the company encountered the trolls one of the ponies became frightened and bolted into the river; Kíli and Fíli nearly drowned getting the beast out of the water.

Up in the Misty Mountains during the thunder-battle the two brothers, being the youngest Dwarves with the keenest eyes, were sent ahead to look for shelter. They found a small dry cave which was perfect for the company (until the Gobins arrived). After Gandalf had rescued the company and was counting the members he found Kíli and Fíli, as usual, paired together.

When Bilbo spied the boat on the far side of the Enchanted River, Fíli managed to snag it with a hook on a rope but could not pull it across. Kíli came to his aid first, followed by Óinand Glóin, before the boat came loose (after its painter snapped).

At the opening of the barrels after the escape from the halls of the Elvenking, Kíli and Fíli came out smiling since they were young and had but few bruises. The two brothers helped Thorin and Bilbo locate and free the other Dwarves. Next, they accompanied Thorin and Bilbo to the bridge into Esgaroth while the others recovered.

When the company reached the Lonely Mountain, Thorin sent out a scouting party to view the Front Gate (or where it had once stood). Kíli and Fíli went along with Balin and Bilbo on this expedition. On another scouting trip Bilbo was with Kíli and Fíli when the three discovered the rough steps that led up the mountain to the little bay that contained the secret door.

Of the thirteen Dwarves, Kíli and Fíli looked uncomfortable when Bilbo asked for volunteers to accompany him on the first trip into the mountain (only Balin went with the hobbit for part of the way). Once the dragon woke up though Kíli and Fíli, along with Bilbo and Balin, were the first to go in the tunnel (sent in by Thorin).

While searching the treasure when the full company descended into Erebor, Kíli and Fíli were in such exuberant spirits that they took down magic golden harps and played music on them.

Kíli was slain with his brother in the Battle of Five Armies, while defending their mortally wounded uncle.  After Thorin’s death, the brothers would have been the only remaining descendants of Thrór’s line. Their deaths ended the dynasty, and the title of King under the Mountain passed to Dáin II. It was their heroic last stand that made their mother the only Dwarf-woman to be mentioned in the genealogies

Because Ori was made the youngest of the 13 Dwarves in the Hobbit films, Kíli is presumably the second youngest. He also comes to have an infatuation with Mirkwood Elf Tauriel (a character made up exclusively for the films). When struck with a poisoned arrow by Bolg during the Company’s escape from the Wood-elves‘ custody via wine barrels, it is she who ultimately heals him with Athelas. Due to said injury, Thorin did not allow him to journey with the others up to the Lonely Mounatin from Lake-town. Óin and Fíli then both opted to also stay behind in order to look after him. As he and the other Dwarves make their way to the Lonely Mountain after Smaug’s demise, Kíli shares a tender moment with Tauriel, and gives her the talisman that his mother had given to him. In the Battle of Five Armies, he assists Thorin (along with Fíli and Dwalin) in attempting to kill the Orc army leader Azog. However, after witnessing Azog kill his brother, he goes into a rage, attempting to charge the Pale Orc, only to instead come across Tauriel getting severely beaten by Bolg, and proceeds to attack him. Kíli is stabbed to death by Bolg, and a heartbroken Tauriel returns the talisman to his lifeless hand before leaving his side. 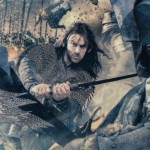 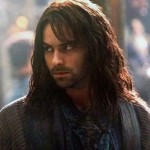